<< Back to Blog
Futsal 5-a-Side Soccer

What's the Difference Between 5-a-side and Futsal?

So, you’re kicking around the idea of ‘small-sided soccer’, eh? You’ve seen teams of five players on smaller pitches, running around, having fun enjoying fitness and competition. It’s recognizable as soccer, but there are not 11 players per team, and they’re certainly not playing on as big of a playing field, or “pitch”. They seem to be playing the same game but you notice subtle differences & wonder, “what’s the difference, and how do I sign up?!”

All over the world at all different ages, small-sided football is played and enjoyed just like the traditional 11v11 game. Whether you’re just starting and looking to improve your skill level, or you are looking to get back into the “beautiful game” -- both styles we’ll discuss here are fast-paced, fun, and help you stay active.

Overall, both types of small-sided soccer place a big emphasis on fast reaction times and technically sound footwork but, with a wider pitch and goal size, 5-a-side requires a strong defense while Futsal focuses more on an attacking style of play.

What is 5-a-side Soccer?

On the surface this version of the traditional game appears to share many qualities with the widely-popular 11v11 but, as any experienced player will tell you, the skills required to win are very different. With more of a focus on quick, risky plays, 5-a-side sets itself apart from the traditional game by its smaller pitch and faster action. The pitch is much smaller than 11v11, around 40 by 30 yards. It is also played on a low, walled-in astroturf field with a net above to keep the ball in. The players are allowed to use the walls around the field but the ball must not touch the net above the wall. The goalkeeper is not allowed to leave his area and the outfield players are not allowed to enter it.

Despite the fact it has been recognized by FIFA as an official type of football, futsal is not so widely known or played. Futsal also requires only five people per team, a small indoor space and a football to be played. Unlike 5-a-side, Futsal does not use a short wall and net to keep players and the ball in, only marked lines. Futsal is fun, fast-paced, and full of quick decisions and plenty of goals. This version of football requires a high level of fitness and skill to play professionally but remains a great choice for newbies looking for a fun way to get into football.

What are the Differences Between 5-a-side and Futsal?

While 5-a-side and Futsal may seem very similar on the surface, after a closer look, there are several important differences between the two types of small-sided football. Notable differences change the flow and feel of the game.

1. Match length: Both versions of the game are played in two halves but, 5-a-side is made up of two 30 minute halves, while Futsal is significantly shorter with only 20 minute halves. On top of this, the timer in 5-a-side runs constantly (“running clock), with stoppage time or injury time added to the end of the match when necessary. Futsal follows the traditional, more accurate method of pausing the timer during stoppages and restarting when play resumes.

2. Ball size and bounce: As an indoor sport, Futsal usually requires a heavier, size 4 football with very little bounce. The weight helps to control the ball throughout the game, ensuring it won’t bounce higher than the players’ heads or more than once. This is different from the ball used in 5-a-side, which is most often a traditional size 5 ball.

3. Pitch size: Although both 5-a-side and Futsal have the same number of players on the pitch, 5-a-side (40 by 30 yards) has a wider pitch, challenging defenders to widen their covered area against attackers. Futsal pitch size, on the other hand, is 40m by 20m, making for a longer, thinner playing space. This makes attacking with the ball significantly more difficult, putting a premium on nimble footwork and fast decision-making.

4. Goal size: To make the task of the attacking player even more difficult, the goal size in Futsal is only 3m by 2m. In comparison, the goal in a 5-a-side match is wider and shorter, measuring roughly 16ft by 4ft.

6. Fouls: In terms of fouls, tackling is forbidden in 5-a-side and Futsal, but unlike Futsal, in 5-a-side, it does not result in a free-kick, the ball is instead returned to the goalkeeper.

7. Footwear: Footwear differs between Futsal and 5-a-side football. For Futsal, it is recommended that there are no cleats. The indoor football shoe is designed with a rubber sole for ultimate grip. In 5-a-side you can play with turf cleats, which are mini cleats that are better suited for direction changes and other movements on this synthetic surface. Let’s Play Small-Ball!

There are lots of different reasons players get into smaller-sided games. Players looking to advance their skill-set often gravitate toward 5-a-side or Futsal to improve their arsenal of footwork abilities. The smaller pitch and fewer players requires each player to possess a high level of ball-handling skills. You may also be looking for a fun and competitive way to stay in shape and play the game you love. As we age and our knees and lungs begin to tell us to taper expectations - the itch to play and compete still lives within. 5-a-side and Futsal, while still very physically demanding, negate the “sprint to cover 50 yards of field” type plays. This means more action for the games. Now, to decide which one is for you. Hint: It might be both, because, why limit yourself?! 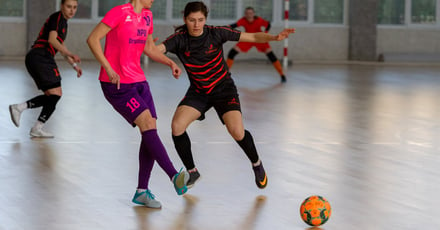 What Is Futsal? | Urban Soccer Park

If you are looking for a way to conveniently improve or maintain your soccer skills, then you...

Whether you are new to the game of soccer or you’ve been enjoying the game for years, you may...